Seventeen tournaments into the Tenacious Golf Tour seems like a fair time to take an assessment of the way the thing is going. We’ve been using History Maker Golf from Plaay, specifically their Tournament Mode. This is the money list, with a slight modification to add each golfer’s tournament rating into the list. 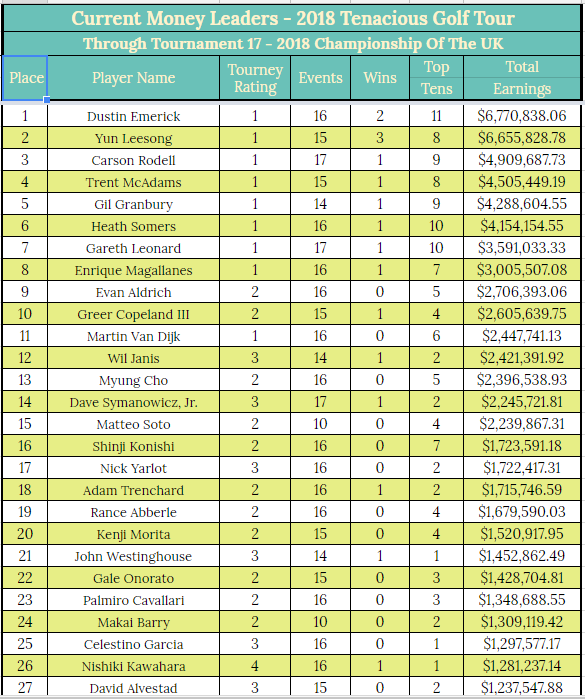 The biggest surprises are Wil Janis, Dave Symanowicz Jr and Nishiki Kawahara, two 3’s and a 4 who won tournaments.

But the greater feeling I get is that there is probably too much tourney rating influence in the game for my tastes. I think the mechanisms are great. But one of the fun things that Keith does with his mechanisms is to hide the effectiveness of the system so that it’s tougher to guess what’s going to happen. But with Tourney Ratings that remain static, there lacks the mystique of seeing things gel in a less obvious way.

This probably came to the forefront for me as top-dog TR guy Dustin Emerick (he sports a 1-A) has won two tournaments in a row, including the major at Carnoustie. I’ve been expecting him to show dominance, and if he had gone 24 tournaments without some kind of win or two, it would have been surprising. Now that the surprise factor is gone, it made me look even closer at the names at the top of the money list and say, “Wow, it’s just the way it’s supposed to be.”

In baseball, the slightly bitter taste of knowing a player’s stats going into a replay is dulled by the idea that stats don’t always equal wins (ask Mike Trout). In an individual sport like golf, the trait-based HMG is still fine to produce some interesting intermittent results (see Emerick not winning in the first 15 events).

But the Tourney Rating is extremely influential, and I will likely be brainstorming a homebrew fix for my own use on the 2019 TGT/Slacker. It may be increasing some tournament-to-tournament variability for TR’s. More likely it would be tinkering with the B+ thru D- rating system, dulling the effect of TR in post-cut determinations. Since I have my own spreadsheets that automate Keith’s out-of-contention formulas, I should be able to apply some alternative methods – even to the point of using random numbers to assign golfers ranks within the various grading levels.

Clearly with Tournament Mode you need some basis to cut at the halfway point of a tournament as well as pull guys into the final groupings. I think the ratings are very helpful for that. Where I think I’ll need to tweak is when it comes to sorting out places 13-70ish, so that the money list adopts a less predictable feel.

And again, this is mostly for my own tastes. It’s quite likely that the TR effect comes off exactly the way that the Plaay design team desired – and if you’re replaying a season, you’d like to quite closely replicate real life. But in a fictional universe, I think less predictability suits me better.